We Are From Dust is busy mounting exhibitions of participatory artwork in locations around the world. Here’s an alphabetical list of currently exhibited artworks.

Michael Christian, one of Burning Man’s most recognized and prolific artists, loves building fun and playful interactive sculptures with an organic aesthetic. His work has been exhibited around the world at festivals and in public places.

Futures Past, by Kate Raudenbush

Future’s Past is a monument to man’s technological advancement has been mysteriously abandoned to time and left to seed. In its place, a monument to nature grows out of its fertile ground. The angular black steel roots of modern computer circuitry in the shape of a stepped pyramid give way to the ancient roots of a sacred Bodhi tree, as it reclaims this relic of our Future’s Past in its embrace.

Commissioned by the Burning Man event in August 2010, Future’s Past  addresses the concept of modern development by creating a cautionary tale of collapse. This installation is a modern ruin, an architectural artifact found in the future. Once built as a monument to technological progress, this pyramid of system circuitry has been abandoned through unchecked consumptive collapse, but reclaimed by the resilience of natural forces, and evolved consciousness, symbolically represented by the roots of a sacred Bodhi tree, a symbol of Siddhartha’s seat of enlightenment, and our own.

Niloticus is a 40 foot long mosaic crocodile is one of the largest mosaic sculptures created by artist Peter Hazel. The color scheme of the project is a celebration of color on the Playa — cobalt, Caribbean blue, and emerald green are the artist’s fanciful vision of a crocodile.

Niloticus has a steel structure and is surfaced with ceramic and glass. The majority of the crocodile is covered in handmade ceramic tiles in the blue and greens. The colors continue into the fins of the crocodile with hand blown green and blue glass lit up by programmable LEDs, making for an excellent light show.

The Purr Pods are two large, metal, feline-shaped sculptures, lounging in their own clowder, each in a different pose with cozy built-in seating.

During the day, the sculptures provide a restful place to sit and take in the view of the San Pablo Bay and Point San Pablo Harbor. By night, color changing LED lights draw participants in to explore the curves of the cats and cuddle up against them.

When petted, these kitties purr! Cats purr at luscious, vibrating frequencies, between 25 and 150 Hertz, known to be therapeutic and calming.

Zlatìčo is inspired by the work of Alfonse Mucha.  It is a phrase that means “little gold,” and is used as a term of endearment, such as “sweetheart.”

” As person with Czech lineage I enjoyed connecting with the art of one of my ancestral homelands and bringing it out of the conceptual, two dimensional realm and into life where people can interact with it. “

Hugo Farmer’s art represents activism. His works are based around the theme of our human rights and in particular freedom of expression.

Bristol born Hugo Farmer is an artist and sculptor and has worked as a boat builder, carpenter, sound engineer, producer and set designer. 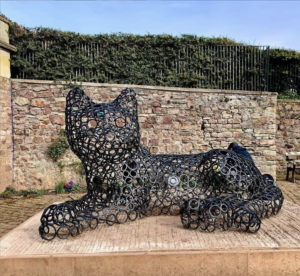 Our second Purr Pod  installation is in Bristol (UK), on the ground of Ashton Court Mansion, a 13th Century stately home. Named Bristol Boo, she is placed in the courtyard opposite the café.

This exhibition is in partnership with ArtSpace LifeSpace, a charity that recycles vacant, under-used and problem properties into thriving creative resources.